Welcome to the Canterbury-Bankstown Bulldogs Wiki 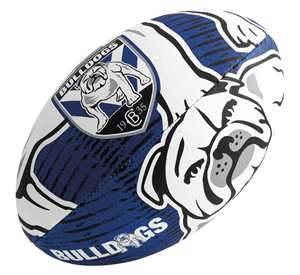 The club was admitted to the New South Wales Rugby Football League premiership, predecessor of the current NRL competition, in 1935. They won their first premiership in their third year of competition with another soon after, and later went through a very strong period in the 1980s, winning four premierships in that decade.

Known briefly in the 1990s as the Sydney Bulldogs, as a result of the Super League war the club competed in that competition in 1997 before changing their name to the geographically indistinct Bulldogs and continuing to play every season of the re-unified NRL, winning their most recent premiership in 2004.

The name and emblem of the club has changed several times over its history. At the club's foundation in 1935, it was known only as 'Canterbury-Bankstown', without an animal mascot. The nicknames 'Berries' and 'C-Bs' (or, derisively, 'Country Bumpkins') were often used informally, 'C-Bs' being used from the outset and 'Berries' coming into use by the mid 1940s. The club had been referred to as the 'Bulldogs' as early as 1977. In 1978, the Bulldog mascot and name was adopted, with the club becoming known as the 'Canterbury-Bankstown Bulldogs'. This was the name used throughout the team's 1980s glory era.

In 1995 the club name was changed to 'Sydney Bulldogs', reflecting a similar change by Eastern Suburbs (to 'Sydney City Roosters'). The name changed again in 1996, returning to 'Canterbury Bulldogs' with 'Bankstown' omitted, and yet again in 2000, to the geographically indistinct 'Bulldogs'. Bob Hagan, the club boss at the time of the 2000 change, explained that the dropping of the name 'Canterbury' was intended to broaden the appeal of the club outside of its traditional supporter base, so that the club could attract a geographically diverse following like Manchester United or the Chicago Bulls. Despite the name change, some supporters, as well as many television and radio commentators, continued to refer to the club as 'Canterbury'. In the most recent change, board officials voted in late 2009 for the club to return to 'Canterbury-Bankstown Bulldogs' from the 2010 season onwards.

The initial crest was a 'C-B' in a shield. The adoption of the 'Bulldogs' name and mascot took place in 1978. There have been three main versions of the mascot logo. The first, which featured a snarling bulldog inside a circle, was replaced in 1998 by a more 'cartoonish' logo of a bulldog's head. In 2009, the club announced that the logo would be changing again, and asked members to vote on which of two similar proposed logos would be used from 2010. The rationale for the logo change was to celebrate the club's 75th anniversary in 2010 and to better reflect the club's "true essence and history". Two months later, the new design was unveiled, with the official change of logo taking place in November 2009.

The current logo returns to the standing bulldog of the 1978–1997 logo, although it is no longer snarling. It also references elements of the club's history by incorporating the 'C-B' emblem, the club's year of foundation (1935), and the blue and white 'V' design which has featured on many of the club's jerseys over the years. The change of name from 'Bulldogs' to 'Canterbury-Bankstown Bulldogs' took place after the new logo was unveiled.

The Bulldogs have played in predominantly blue and white strip since the club entered the league in 1935. The only exception to this was during the Second World War, when rationing meant they had to wear a maroon jersey with a blue 'V'.

There have been three basic strip designs since the club's inception in the top flight league competition:

This design had blue and white irregular stripes worn with black shorts. The irregular strip has been used recently in occasional 'heritage' matches (e.g. Heritage round in 2008 vs St George-Illawarra)

In their inaugural season, very few home matches were allocated to the Canterbury-Bankstown club. However, when the opportunity arose the club took their matches to either Marrickville or Pratten Park. From the following season, the club began to base itself at Belmore Sports Ground. The club had a long-time affinity with the ground and stayed there continuously until 1994.

In 1995 when the Super League War began to come about, the club changed its playing name to the "Sydney Bulldogs" in an attempt to broaden its fan base and played matches at Parramatta Stadium where spectator facilities were of a higher class. This move paid off with the club going on to become premiers that season. However, the club reverted its name to Canterbury for the 1996 season and once again played matches out of Belmore Sports Ground; something that lasted up until the inaugural National Rugby League season of 1998.

Once the new Stadium Australia had been finished and opened in preparation for the Sydney 2000 Olympic Games, the club began to play matches there between 1999 and 2000. From 2001 to 2005, the club then began to play matches out of the new Sydney Showground at Homebush Bay, with bigger matches played out of the then-Telstra Stadium from 2003. When fans began to complain about the poor quality of the Showground venue as a rugby league ground, the club eventually decided to move all future home matches to the Stadium, where the club remains. In 2008, Telstra Stadium became known as ANZ Stadium due to a naming rights change.

Retrieved from "https://est1935.fandom.com/wiki/Canterbury_Bankstown_Bulldogs?oldid=4295"
Community content is available under CC-BY-SA unless otherwise noted.